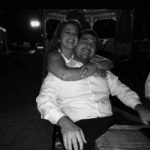 Nick can’t remember a time when he didn’t want to start his own business, but in the typical accountant fashion he was always too risk-averse to take that leap of faith. But after years of sitting behind the computer, pestering from his entrepreneurial roommate, and a great concept Nick knew it was now or never.

Nick can recall the exact moment he knew this was the future he wanted to chase.  After wrestling with his mind for weeks, he was sitting at the island in his kitchen with a can of Revolution in front of him when the phrase popped into his head, “when you are old and reflecting on life you won’t regret the things you tried but the rather the things you never attempted.”  He sent Jason a simple message, “Let’s do this”

Nick’s level of excitement for Higher Gravity and shoot from the hip ways sometimes need to be reined in by Jason but hey every Ying needs his Yang.

Anything you put in front of him. But really the go to is MadTree’s PSA. When I first got into craft beer it was IPAs all day but as the craft market has matured, so has Nick’s taste buds. Check out his Untappd to see what he’s up to /in to these days: Nick_Higher Gravity

If you see Nick wearing headphones he’s not trying to ignore you and be rude. He just really loves podcasts. Nick is always searching for ways to expand his knowledge and listening to podcasts offers a wide array of things to choose from.

Nick loves talking about philosophical questions while drinking, whether it be politics, religion, or anything in between.  Because believe it or not you can have a conversation and discuss differences of opinions without hating someone. He’s also really into cuddly puppies, but doesn’t mind if you’re a “cat-person” 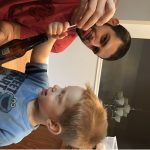 Like many, Jason’s love of all things alcohol started in college, but his love for craft beer blossomed with his career as a business consultant.  Travelling around the world for clients gave him a unique opportunity to try beer from everywhere and he quickly developed a passion for the craft.  He started home-brewing in 2012 (you can find his beers on Untappd under the name “City West Brewing Company”) and has become even more obsessed with beer since.

Nick and Jason had always talked about opening a bar since the day they met in June 2008, but they never really pursued it.  In 2014, Jason had a son and his views on living the consulting life completely changed.  Wanting to be in-town more, he started searching for something different.  His experience working with a local start-up connector, Cintrifuse, led him to seriously consider doing his own thing – and of course it had to be focused around beer.

That answer would probably change every time you asked him and he has a hard time committing to one beer at a time.  If you asked him, he would speak of favorites based on styles (IPA: Heady Topper, Belgian: Westvleteren 12, Stout: Coffee Please – you get the point).   The beer that started his love for craft beer was Widmer Brothers Hefeweizen. You can check out his Untappd to see what he’s up to /in to these days: Jason_Higher Gravity

Jason has a 2 year old son named Jordan who is named after the GOAT (sorry Lebron, but it’s true).   The funny part though is that Jason is a die-hard Duke fan.  Confusing, we know, but he’s more than happy to explain his life choices over a few beers.

When Jason isn’t at Higher Gravity, he likes to stay active.  Some of his favorite activities are sand volleyball, basketball, running and biking.  He actually used to hate running, but being the middle child he is, he decided to commit to doing the Flying Pig Half Marathon when his older brother bragged about running a half.  Several half marathons, a full marathon and multiple obstacle course races later, he STILL hates running.  He does always feel good about doing it afterwards though.  At the very least, it justifies all the beer.

Rylan can be found wandering the streets of Cincinnati on two wheels whether that is by bicycle or his Honda Nighthawk motorcycle. Accounting by day, beerista by night and weekends Rylan has joined the team at HG to continue learning about one of his favorite hobbies: craft beer. His interest with craft beer was sparked by the competitive marketplace and pure number of choices that have popped up over the years. Working at HG has opened up his pallet to a number of styles and breweries across the board. His common saying is “so many beers, so little time” when asked about the beers he has tried.

Rylan is on a quest to answer the resounding question of “What makes a good beer?” Rylan considers himself a seasonal beer drinker when it comes to his selections throughout the year.  Hops in the summer and Stouts/Porters in the winter are his style.

Rylan is a Certified Beer Server recognized by the Cicerone Certification Program so feel free to chat him up with your beer talk! 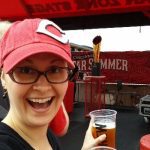 Jen loves craft beer so much that she decided to make the leap from slinging beer out of festival tents to serving it up in this fine establishment, which happens to be mere moments from her front door.  Jen may not have on-the-spot knowledge of specific beers (yet), but with a unique beer tally of over 3,000 beers on Untappd, it’s a safe to say that she has a few recommendations up her sleeve.  She looks forward to learning even more about craft beer through her experiences behind the bar.  Jen’s an interior designer/project manager by day and loves the following things: breweries, cats, music festivals and concerts, Buckeye football, cats, vinyl records, and cats.

It’s impossible to choose just one!  While Jen’s enjoyed a great deal of beers across a great many categories, a few notable beers she’s enjoyed recently are Listermann’s Revenge of the BabyCat MeowFace and Urban Artifact’s Wine Barrel Aged Blueberry Pie.

Jen is active in local community theatre as an actress, singer, and dancer.  When not in rehearsals or behind the bar, Jen keeps up her skills through weekly tap classes and the occasional karaoke session.  She does take requests, but results may vary depending on the song and her current beer tally. 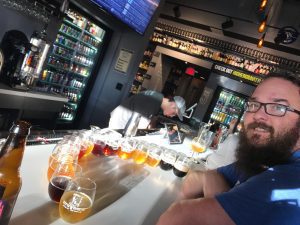 Chris’s life outside of his daily office job focuses around beer and books.  He is an avid reader taking on the top 100 novels from the Modern Library.  When Chris is not reading, he is studying beer. Whether it be styles, off-flavors, brewing, or food pairings – if it’s beer related it’s fair game.  Chris is a Midwest native who spent the last 15 years in LA.  Hit him up with any beer questions.  If he doesn’t know, he will find out for you!

That is completely subjective.  There is no style that Chris will not drink.  The best beer depends on so many factors and is never the same.  He prefers big beers such as barrel aged imperial stouts and double IPA’s but still loves a good session ale.

Chris is Certified Cicerone(R) and currently studying for his Advance Cicerone certification.  Be careful asking him beer questions.  He tends to give out way more information than you may be looking for.